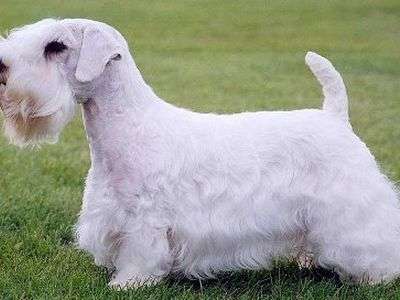 The Sealyham Terrier is a breed of dog that was originally bred to hunt badgers, foxes and otters. These dogs that are very affectionate and these days are first and foremost companion dogs. They are a terrific choice for a beginner terrier owner.

This breed gets its name from Sealyham, which is the estate of the late Captain John Tucker in Wales. They were very popular in England at the beginning of the 20th century. The year 1903 marked the first time they appeared in a show ring in Britain and the first Sealyham Terrier Club was started in 1908. Although known as an excellent dog for a companion, this breed has not been particularly popular with the general public and is only ranked 149th out of 155 breeds recognised by the American Kennel Club. Since making their show debut in California in 1911, they have won many prizes but are still considered a rare breed.


Overview of the breed

Known by the nickname 'Sealies' these are distinctive looking animals who are self-confident, inquisitive and calm. People who own one say that once you have experienced a 'Sealy' you can never go back to another breed. In the UK, even though they have skirted popularity in the past, like the US they are considered an endangered native breed.
Sealyham Terriers are not large animals. They have longish broad heads, and bodies that are extremely muscular. The ears are folded to be level with the top of the head, and their eyes are deep set in their heads, and dark. In it not unusual in the US for the tails of Sealies to be docked.
The personality of this breed is enchanting. A Sealy is not as active as most Terriers and is often described as the 'couch potato' of the Terrier family. In saying this, the Sealy has a great sense of humour, and is always looking to play, and gets along very well with people and other dogs.
As with any breed, there are imperfections, and Sealies can often exhibit the typical Terrier stubbornness.

Because the Sealyham Terrier is a small dog, and robustly built, he is an ideal choice for both country and city dwellers. Inside the house, he is not very active, but as long as he is given a daily walk, can usually survive quite easily without a yard or garden. If the owner does have a garden, it should be adequately enclosed to prevent the Sealy wondering off, or chasing other dogs.
Similar to the majority of Terriers, Sealies enjoy digging and barking and need consistent and firm handling. It is thought that they are difficult to housetrain, but with patience and a well thought out schedule the owner will be rewarded with a perfect house pet. For city owners, crate training is highly recommended.

The average height is around ten inches tall at the shoulder. They weigh around 22 pounds and have a life expectancy of between 10-12 years. If a Sealy becomes overweight, then he may get problems with his back. It is important to monitor the daily intake of food, and give regular exercise to keep him healthy and active.