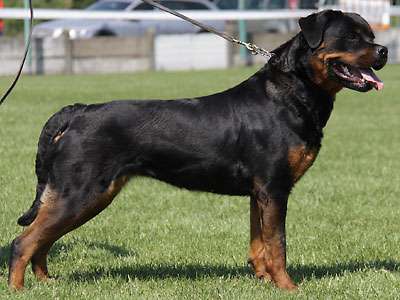 Rottweilers have muscular, powerful bodies with broad heads and rounded foreheads. They have well-developed muzzles, while their teeth come together in a scissors bite. They are characterised by a black nose and lips, while the inside of the mouth tends to be dark. While their medium-sized eyes are typically dark brown, Rottweilers occasionally have blue eyes, while they may also have one dark brown eye and one blue eye. The rear dewclaws of the Rottweiler are often removed, while the breed features a broad and deep chest. The Rottweiler is covered with short, thick fur, which is black with mahogany and rust markings on the muzzle, cheeks, legs and paws. Some Rottweilers also feature red fur with brown markings, which is a result of a deficiency in the hair gene.

The Rottweiler is prized for its competitive obedience and is widely used for tasks such as search and rescue, tracking, guiding the blind and disabled and carting. However, the Rottweiler’s gentle nature and loyalty also make it a good family dog. The Rottweiler is calm and easily trainable, especially if training is started from an early age. The breed needs a firm hand to control its massive bulk and responds well to commands. It is important to establish dominance over this breed so that it does not try to be act as the pack leader. The Rottweiler can live alongside other household pets if introduced to them as a puppy.

The Rottweiler is prone to a number of health problems such as dysplasia and ACL damage, while entropion, which is the narrowing of the gap between the eyelids, can also occur. Rottweilers tend to snore when they sleep and their diet and food intake need to be monitored carefully to make sure that they do not overeat.

Rottweilers can live either indoors or outdoors and require only minimal space for exercise in a yard or home.

The Rottweiler requires lots of exercise and/or work in order to thrive. In addition to long walks, Rottweilers also enjoy activities such as swimming, running alongside bicycles and playing ball games. Their fur is easy to groom and can be brushed with a firm bristled brush.