Livestream Sponsorlar Shop
Merhaba
Register to use all functions.
Detay 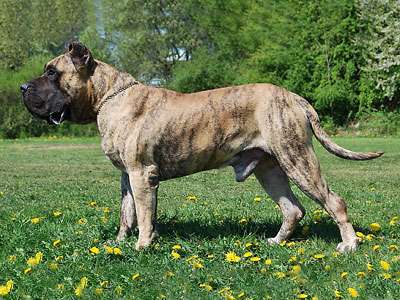 This robust breed has a powerful and strong head that is roughly the same width as the length. The Presa Canario has a deep and broad chest, while its rump is raised slightly. The breed is characterised by its thick skin, powerful muscles, dense bones and massive head, which comes complete with a large jaw. The coat is rather is short and is often fawn, while marbled markings are also common among the Presa Canario.

This docile and affectionate dog is a great family companion and relates well to children. Due to its protective nature, the Presa Canario tends to be distrustful of strangers, which means thorough socialisation from an early age is essential in order to prevent the breed becoming aggressive. Although the bark of this breed can be intimidating, it will rarely attack unless it receives instruction to do so, especially if the training process has been completed effectively. It is important that owners display dominance over the Presa Canario to prevent its alpha nature from coming forward and if the breed senses fear it will use this to its advantage to become dominant. This breed can be raised with other animals such as other dogs, cats and birds to help suppress its distrustful nature and make it more sociable. The Presa Canario tends to growl to show its displeasure and can bite if it feels that itself or its family are being threatened. However, this trait can be suppressed with proper training.

No major health problems are associated with this breed, which is known for being very strong and adaptable to all different types of conditions.

The Presa Canario can live fairly comfortable an apartment as long as it gets plenty of exercise. This breed is quite inactive indoors and also requires a fairly large garden to run around in.

The large size and stamina of this breed means that it needs to be taken on a long walk every day. If not kept firmly in its place it can become overpowering, so the Presa Canario must be taught to heel quickly. The breed thrives when given tasks and can become bored easily if not stimulated mentally and physically. This breed’s rough, short coat is easy to groom with a firm bristled brush. Bathing should be kept to a minimum and it is generally sufficient to simply wipe the coat with a chamois to make it gleam.