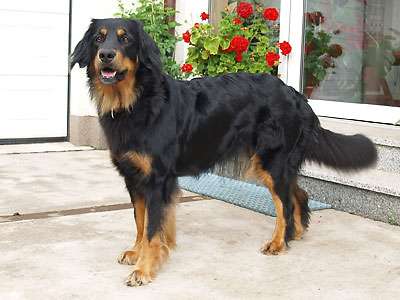 The Hovawart hails from Germany and is believed to be descended from the Leonberger, the Hungarian Kuvasz and the Newfoundland. This was originally a working dog and was deliberately developed to follow in the footsteps of the great estate guard dogs of the Middle Ages. After becoming virtually extinct at the start of the 13th century, the breed was reconstructed by Kurt Konig in the 1920s and was officially recognised by the German Kennel Club back in 1937. Although the Hovawart is rare in the USA it is popular in Germany and other parts of Europe, where it is used as a watchdog, a rescue dog and for tracking.

The Hovawart resembles a Golden Retriever and features a powerful head with a rounded and broad forehead. The muzzle and skull are roughly the same length, while the stop is well-defined. The Hovawart features a black nose that has well-developed nostrils, while the teeth meet either in a level or scissors bite. The breed has oval shaped eyes that are medium to dark brown, while the triangular ears are set wide apart and high on the head. The front legs are strong and straight with round, strong and compact feet, while the toes are well-arched. The coat is long-haired and dense, while it is also slightly wavy. Longer hairs can be found on the chest, back of the legs, belly and on the underside of the tail, while the coat colour can be a combination of black and gold, blond or pure black.

The Hovawart can be calm and obedient as long as it is provided with plenty of exercise and dominance has been firmly asserted. Even after dominance training has been completed, the Hovawart will attempt to challenge humans for dominance from time to time and will need to be put firmly in its place to prevent problems from arising in the future. This breed is loyal to a family and is particularly good with children, while its strong sense of territory means that it will never wander far away, even when let off the lead in a park or other outdoor area. The Hovawart has a strong bark and will use this bark as a warning sign to other dogs and intruders.

The Hovawart is generally a very healthy breed and has few associated health problems. However, European lines of this breed can suffer from underactive thyroid, while hip dysplasia can sometimes occur.

This breed is quite active indoors and is not suitable for an apartment. The Hovawart prefers cool climates and is able to sleep outdoors, while it also requires a fairly large lard to run around in. this makes an excellent farm dog, as it excels at tasks such as watchdogs for fields, country houses and stables.

The Hovawart requires daily exercise in the form of a walk, run or jog. When taking this breed for a walk it is important to make sure that it heels when on a lead and does not run ahead, otherwise it will assert dominance and be more difficult to control in the future. The Hovawart enjoys being able to run off the lead and get run over rough terrain easily. The coat of this breed is easy to groom and the removal of tangles from time to time is all that it required.