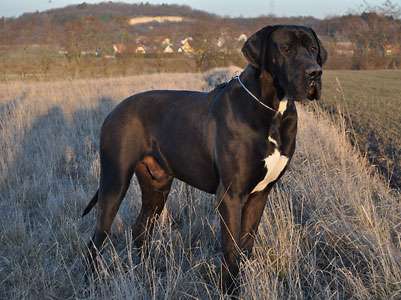 Being one of the world’s tallest canine breeds, the Great Dane is an imposing picture of stately authority and power, yet its nature completely contradicts its physical appearance. For gentleness and affection, this dog’s temperament takes a lot of beating.

Male Great Danes are generally around 30 to 34 inches tall at the shoulder and weigh in at an impressive 120 to 200 pounds. A female can weigh an approximate 100 to 130 pounds and is shorter in stature by at least 2 inches. Its short, smooth coat can be one of a variety of colours from the most common, harlequin, which is white with black patches, through to fawn, black, brindle or a bluish grey, and is prone to a medium amount of shedding. A long, rectangular, massive head sits atop a regally arched neck and boasts a deep muzzle with a pronounced stop. The long legs move in easy and measured strides, while the upper body remains perfectly poised. This, together with a high-set tail adds to the thoroughly regal demeanour of the Great Dane.

This breed of dog is a true example of a ‘gentle giant’ with love enough for a family as large as its frame. It is extremely tolerant of children and will treat them to its own brand of playful and considerate affection. The Great Dane loves people in general and enjoys being around them, to the point of leaning or jumping on them at every opportunity. This does not mean that it does not make a great watchdog. If circumstances require this magnificent animal to become aggressive it will do so with little hesitation, and this is one of the few times that its deep growl and thunderous bark will be heard.

The Great Dane is not a naturally aggressive dog and responds well to an established pack leader. Despite its great size, this dog should be socialised early and then constantly in order for it to build the social confidence that it sometimes seems to lack, and to keep its even temperament. Early discipline is also necessary to control the young dog’s exuberance and rowdiness. A confident owner is essential if this large breed is to learn to curb the enthusiasm that can literally bowl one over.

The sheer size of the Great Dane makes them prone to some serious health conditions, including heart problems and cancer. Their massive weight also puts strain on bones and joints and problems can arise at an early age. Therefore, veterinary bills can be frequent and this should be taken into consideration by potential owners. Sadly, this breed has an extremely short life span, which averages 10 to 11 years.

Early and firm training is necessary to tame the natural boisterousness of a young Great Dane. If discipline is not established early on, then its size can equal the amount of destruction this dog can cause. It has a sensitive nature though, and will not take well to aggressive training. It goes against their instincts and will only cause confusion and frustration and make them distrustful of people.

Anyone with an interest in owning this very imposing breed of dog should do a fair amount of research before making a final decision. A Great Dane eats less than one would expect of such a large dog, but does better eating good quantities of meat and chicken, which can be expensive. Their susceptibility to a range of ailments will also need special care and this should be carefully considered before committing to ownership.