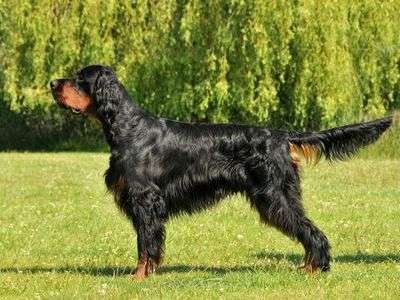 Originally called ‘Black and Tan Setters,’ these dogs were brought to Britain from Europe in the early 17th century. Those raised by the 4th Duke of Gordon at his Scottish estate in the early nineteenth-century were considered particularly fine examples and the Black and Tan was officially named the Gordon Setter by the Kennel Club in 1924. They were introduced to the USA in the mid-nineteenth century and the breed was recognized by the American Kennel Club in 1892. Gordon Setters were placed on the Vulnerable Native Breeds list by the Kennel Club in 2006, indicating that less than 300 Gordon Setter puppies had been registered that year, but were removed from the list and reclassified as viable in 2007.

Gordon Setters are medium-sized dogs with a long, lean neck, a deep chest and a body that slopes from the shoulders to the tail. They reach a height of 24.5 to 26 inches and should weight around 55-65lbs. Their distinctive coat is long and silky and can be either straight or have a slight wave. The coat requires regular brushing and combing and should be deep black with clearly defined tan markings that become a rich chestnut or mahogany colour in adult dogs. These should include two clear tan spots over the eyes and on the chest and tan on the muzzle and on the hindlegs and forelegs. The head is deep and should have a slightly rounded, broad skull with lots of brain room and a clearly defined stop. The muzzle is fairly long but not pointed and the jaws are strong, with a scissor bite. The eyes are dark brown and bright and the dog has medium-sized ears that lie close to its head and are set low. The tail is straight and usually held horizontally to display long feathering.

Gordon Setters are loyal and loving to owners and family members but are not usually keen on approaching strangers. They can also be quite aggressive with strange dogs and it is important to thoroughly socialise Gordon Setters at a young age to accustom them to dealing well with new people and situations. They need one or two hours of exercise daily, with two long walks a day, and should have access to a large garden. They should not be left alone in the garden for long periods, though, as they have a tendency to bark if bored and unstimulated. Gordon Setters should be given firm but kind leadership from puppyhood onwards as they have a tendency to be stubborn and strong-willed. They have an average lifespan of 10-13 years and are prone to dysplasia of the hips and elbows, hypothyroidism and Progressive Retinal Atrophy; an eye disorder that can cause blindness. Dogs with any of these problems should not be bred. Like most deep-chested dogs, they are also prone to gastric torsion, or bloat, and they should not be given one big meal a day, but instead should have two or three smaller meals spread throughout the day and should never be fed directly before or after exercise.