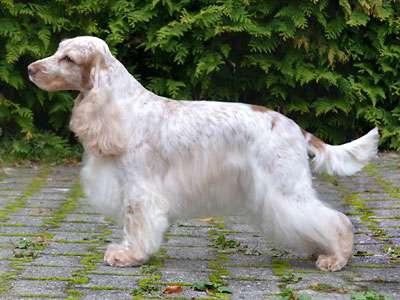 This definitive dog has long been a part of the English dog scene. Although outside of Europe the tail of the English Cocker Spaniel is usually docked, this practice is illegal in most of Europe.

This breed has a medium-sized, compact body with an arched head that appears slightly flattened. The muzzle of the English Cocker Spaniel has a defined stop and is the same length as the head. The nose can be either brown or black, while the teeth meet in either a level or scissors bite. This breed has distinctive hazel or dark brown eyes and bears low set ears that are covered in wavy or silky fur. This breed has a wide variation of coat colours such as solid black, brown and red, while it may also have brown and white markings.

The English Cocker Spaniel can live comfortably either in an apartment or in an outdoor area such as a yard. However, the breed prefers being around people to being alone likes to sleep in the same room as other members of the family if possible.

This breed requires a large amount of exercise, including a daily walk. When talking the English Cocker Spaniel for a walk on a lead it is important that the dog be made to walk behind or heel, as it will try to assert its dominance by walking ahead and if this is permitted to happen, the dog will be much more difficult to control. The coat requires regular combing and brushing, while the ears such be cleared of excess wax from time to time. The hair on the feet should also be brushed, while the hair around the pads needs trimming occasionally.