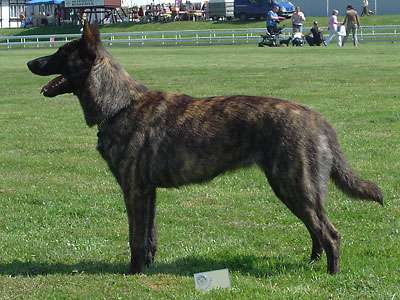 The history of the Dutch Shepherd Dog goes back approximately 100 years, when they were used on Dutch farms to herd flocks, guard livestock against predators, and to generally make themselves useful in any capacity. The breed was fairly common at that time, but after the Second World War, their numbers dwindled to near extinction. Many were taken to be used as service dogs, and those that were left died of starvation. A handful of Dutch breeders were determined to see the breed survive, and thus began a whole new line, descendants of the dogs we see today. The first breed standard was created in 1898, and since they were still so rare, any coat colour was accepted. In 1914, when their numbers began to increase, the standard was changed to allow only brindle, and variations of it, to be accepted. This was done largely to distinguish the Dutch Shepherd Dog from the German and Belgian Shepherd. The most notable difference in physical appearance is the Dutch Shepherd's ear set, which is closer to the top of the skull than in the other two breeds. Another unusual feature of this dog is its abnormally long tongue, which has a tendency to loll out of the mouth.

The Dutch Shepherd Dog is medium-sized, standing from 21 to 24 inches tall, and generally weighs about 60 pounds. It is slightly longer than it is tall, with a deep chest, strong loins, and a short powerful back. The coat comes in three different types: short, long, and rough. The Dutch Shepherd also appears in a variety of colours: brindle, grey brindle, salt and pepper, blue grey, gold brindle, and silver brindle.

The Dutch Shepherd Dog is a strong, active dog, with a brain to match. This dog wants, and needs, to be busy. Exercise is essential for this breed, or they will find their own ways to entertain themselves, such as chewing and digging. They are intelligent and quick to learn, making them an ideal dog for herding, obedience, and agility. They are gaining popularity for police and military work, due in part that, being a relatively unknown breed, they have few health problems, and have a long lifespan, often up to 15 years. This dog makes an ideal family companion, being friendly and loyal, as long as the owner is quick to establish an alpha relationship, meaning the dog must know who is boss; he will gladly take over! These dogs need to be with their people; they don't do well when left alone for hours a day, (nor, for that matter, does any other breed of dog) and a good romp in the yard or the dog park is in order when they have been left for a period of time. The Dutch Shepherd Dog gets along well with other dogs, and generally any other animal. They are personable with people that they know, although they may be vary of strangers. This quality makes for a loyal guardian and protector of home and property and an excellent watchdog.

The Dutch Shepherd Dog is not recognised by the Kennel Club of the UK. One of the biggest concerns breeders have is the proliferation of the breed purely for profit, as well as the "glamorisation" of the dogs for show purposes. The American Kennel Club is currently in the process of recognizing the Dutch Shepherd Dog. Once this is completed, a worldwide breed standard will be created to ensure the integrity of this breed's future.