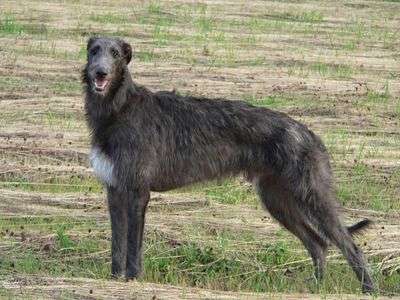 The Deerhound is a very tall wire-haired dog. The male one becomes 75 cm high with a weight between 38 and 42 kg. The female Deerhound reaches a hight of 70 cm with 29 to 38 kg. The head has to be long and should have the wideness and hight of the ears, rather flat than arched. In the hight of the eyes the line of the head is showing up, but without drawing a stop. It has got small Folding ears. The head covering hair is slightly softer than that on the body. The eyes are dark brown til hazelnut-coloured and blackly bordered. The Deerhound has got Tongs set of teeth. Its neck looks similar to a Greyhound aswell as the trunk. It owns well rounded loins and a hanging tail. A straight back is not wished. The Deerhound stands on long, compact and wide paws. On the torso, neck and legs there is 7,5 until 10 cm long hair. At head, breast and belly the hair is softer. The hair is prefered in slaty, grey, patched dark or light, yellow, russet and red-grey with black mask and black ears.

This breed belongs to the wire-haired Greyhounds of the Celts who brang them to Scotland. On Scottish graveyards and wall paintings there are stones of memory and pictures to be found which show the Deerhound. For the first time the Deerhound is mentioned in a document, actually in the year 1747 in the Encyclopaedia Britannica, in which is written down following extract: "The variety, which is called highland Greyhound, now is very seldom, is quite high, strong with deep breast and covered with wired, long hair. In former times this dog breed was very appreciated and was used in great number from the powerful Chieftains during their hunting."
The Deerhound was often mentioned in the novels of Sir Walter Scott, who left a memorial to it with as the figure of Moida in literature aswell as on a gravestone. The breed oft the Deerhound mostly flourished in the 17th century, in the time of the big deer huntings. Since than there are only a few breeder who are willing to work on the complicated task, making sure that the existence of the Deerhound is to be continued.

The Deerhound is a hunting dog for the hunting of deer, rendeer and wild boar. Today dog for accompanying.

At home calm, not very noticeable dog. Very fixed on human beings, tender and loyal, without being obtrusive. Very relaxed with other dogs, reserved towards strange humans, but not shy. With narrow relationship and the possibility to run in an larger area, this dog will not tend to go on its own.

The breed is very demanding. The sensitive dog that is clever and quick to learn is to be educated very well with loving consequence. In everyday situations it is obedient and easy to handle. Very good dog for accompanying huntings by horse. It does not search for hunting, but it does in front of deer automatically. The Deerhound loves races in the nature and needs the possiblity to run free in a larger area. Robust and weatherproof hair, easyly to care for.