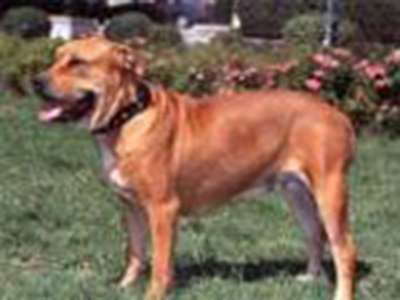 Ca de bou and Mallorquin bulldog are the different names the Majorca Mastiffs - known for their independence, courage and devotion to their master - are known by.

The name Ca de Bou when translated to Catalan – the language spoken in the island of Mallorca – where these dogs originate from, means ‘bull-dog.’ They were used in bullfighting to bait bulls, and according to some sources, to hold the bulls still while they were butchered.

Some researchers attribute the origins of this breed to ancient Egypt; taken to other parts of the world as far west as the British Isles and east as far as the farthest borders of India. Interestingly, during their colourful history, they were used by pirates and highway robbers to loot, and by the people living along the coast and the authorities to guard against these looters.

It was in 1923 that the breed found its way into the Spanish stud books; however, it was only in 1928-29 that it entered the Barcelona Dog Show for the very first time.

According to Wikipedia, it is generally believed that this breed is the result of the Mastiffs, huge herd dogs and Alanos brought to the Balearic Islands by the aristocrats who settled there. The life expectancy of the breed is between 10-12 years.

Psychologically balanced, reserved, laidback, dominant, protective, territorial and independent perfectly describe the temperament of the Majorca Mastiff. They love the outdoors. While they are protective of their caregivers, they don’t crave for attention and can bask in the sun or lay at your feet quite contently for hours together; however, the second they perceive a threat, they are instantly alert and don’t easily trust strangers. This makes them much sought-after guard dogs.

A typical Majorca Mastiff is medium-sized (height at the withers between 55-58 for males and 52-55 cm for females), a bit elongated in appearance, and its general build is strong and powerful. Since the heads of the male mastiffs are slightly bigger than the females in terms of circumstance, it is easy to tell them apart. Furthermore, the almost square head of the male has a larger circumference than its chest; when measured at the withers. They have short coats that are rough to touch. The colours are either brindle, fawn or black. As a matter of fact, breeders prefer the deeper tones of these colours; in addition, white colour – except on the forefeet, chest and muzzle – making up more than 30 % of the dog’s coat is not preferred.

They have strong jaw muscles often reaching to the region just below their eyes. The head does not have any folds. The neck is short and thick with loose skin. The muzzle is black and when in profile, resembles a blunt cone. The jaws are strong and the teeth don’t show unless when the dog opens its mouth. Their large, deep set oval eyes are far apart and the conjunctiva is not visible. The ears are very small and curve inward (called rose ears) and set high up on the sides of the dog’s head. The tail has a thick base that tapers towards the tip.

Their dominant personality and territorial instincts demand they be given strict socialisation and obedience training very early. Up-to-date vaccinations and regular grooming are required.

A Majorca mastiff is a delightful family and guard dog if trained early and allowed outdoors several times every day.