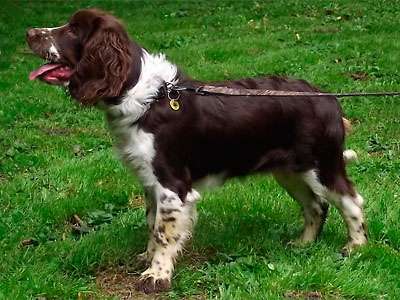 The English Springer spaniel is considered to be the original hunting spaniel, used from as early as the sixteenth century to flush game into nets. Cocker and Springer spaniels were often born in the same litters and denominated simply by size of the puppy. A significant interest was taken in the breed by nobility, particularly in Shropshire and in Norfolk where a Duke’s degree of involvement and interest led to one line of the breed taking the Norfolk name during the mid nineteenth century. The English Springer spaniel was officially recognised as a distinct breed by the Kennel Club in 1902.

A medium sized and compact dog, this breed of spaniel has a medium length coat which requires regular brushing and grooming - especially in the show type, which has longer fur and ears which are more pendant. Although there are a few exceptions, a field or working dog would probably not win in a modern show - and conversely, a show dog would be most unlikely to compete well with its working rivals in field trials.

Show dogs are generally more docile and make good household pets, especially in cities and apartments. They usually have a sociable and friendly temperament and love everyone, doing best with owners who provide them with consistent rules and boundaries. Sometimes, problems can arise with those owners who have timid or retiring personalities, as these dogs may begin to ‘take charge’. Sufficient daily physical and mental exercise is important for this breed. They are sensitive to tone of voice and respond well to calm masters who have natural authority. If left alone for long periods, these dogs may begin to bark a lot and perhaps even become destructive, due to separation anxiety.

With their ‘eager to please’ characteristics, Springer spaniels are quite intelligent, quick to learn and so are considered as an excellent working dog. Being relatively long-legged, they are quite fast and so are often selected for mountain rescue teams, or as sniffer dogs to be trained to search for explosives. They will bark if strangers come to a house but are loving and gentle in nature – even expecting a stranger to stroke them, so are not an ideal guard dog.

Full of energy, English Springer spaniels like to stay close to their owners. They are normally gregarious with other animals, although two male dogs can sometimes be aggressive. They love water, puddles and mud (probably due to their hunting gene pool) and like to play, so therefore might not be the ideal pet for house-proud owners who are quite particular with their cleaning. They can often be seen on beaches, splashing in the water or retrieving branches and balls swimming and sometimes chasing the odd seagull. In short, they love exercise - and need it to be happy (particularly field dogs).

Health wise, food portion control is important to avoid weight gain. As with any floppy-eared dog, they can be prone to ear infections and so should be cared for weekly with cleaning solution (and ear drops if necessary) to help maintain the ear in good health and in its natural slightly acidic state. Life expectancy is usually between twelve and fourteen years although can be ten to fifteen. The breed has a propensity to arthritis in the hips , along with vision loss due to retinal atrophy. It is reported that veterinary scientists are currently trying to identify and isolate this gene.

These days, this affectionate breed of dog remains as popular as ever. Choose from a reliable and reputable breeder to avoid possible bad temperaments.